This comes from a letter written by his comrade Second Lieutenant Donald Henry Pickard, who wrote shortly after Walter’s death.
Taken from Chris Bakers’ research

Although Walter participated in other actions while serving with the battalion, the only obvious event that may have led to a recommendation was a raid carried out by the battalion on 1 January 1918. Details of this action have been compiled for orders and after-action reports held in the following war diaries, all of which are held at the National Archives in Kew, London

I have also examined the army service records of Tull and Pickard, which are also at the National Archives in pieces WO339/90293 and WO339/91272.

On 1 January 1918, Walter’s battalion carried out a raid with the specific intention of taking enemy prisoners. A total of ten officers and 284 men took part. To conduct the raid it was necessary to cross the multiple streams of the River Piave, for the British-held front line was on one bank and the Austrian-held line well over a kilometre away on the far side. The raid was to achieve surprise,
so no initial artillery or other fire was made and the deployment was carried out as quietly as possible.

At 5.30pm, the whole raiding party, under command of Second Lieutenant (Acting Captain) Walter Hammond, assembled and proceeded to the river line.

At 6.10pm, Tull, who had been placed in command of a covering party of 26 men, crossed the streams. The job of his party was to shield the rest of the raid as it crossed the river and proceeded forwards; and to protect it as it later withdrew back to British lines. He was followed by Lieutenant Kenneth Collard Randall and 20 men, who at once put ropes across the streams to act as a guide for the parties that followed.

At 6.40pm, two more parties crossed. They were to deploy as flank guards: that is, they would protect the left and right of the area and ensure that the main central advance would face no
interference from those flanks. On the right was Lieutenant Salter and 50 men; on the left came Second Lieutenants Frank Cowderey and William Conway Day, with 60 men.

The raid proceeded well until 8.15pm when it was detected, and fifteen minutes later the enemy’s artillery opened fire. The main raiding party was still 300 metres short of the enemy’s line and had reached a belt of protective barbed wire. With surprise now impossible, an order was given to retire.

By 9.30pm, all of the various parties had returned to the British lines. They included four men who had been wounded, together with three enemy prisoners. (I also discovered that one soldier, Private Benjamin Levy, drowned during the river crossing. It is curious that none of the reports mention this, except the battalion war diary which records one man was missing.)

On 3 January 1918, the raiding party was visited by the divisional and brigade commanding officers. It is of course quite possible that this was when congratulations and possible recommendations were discussed.

What’s in a letter 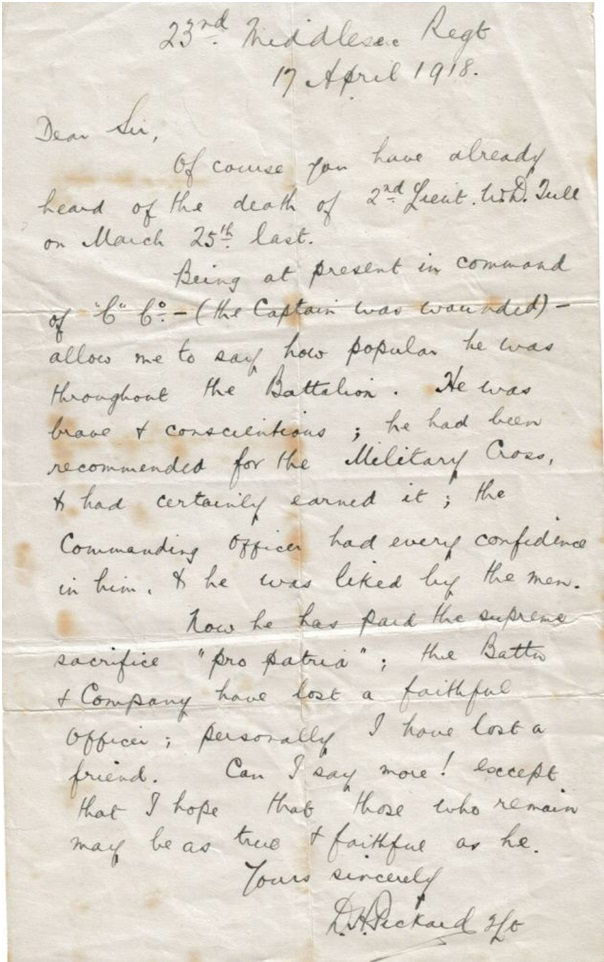 This comes from a letter written by his comrade Second Lieutenant Donald Henry Pickard, who wrote shortly after Walter’s death.
Pickard says clearly that Walter “had been recommended for the Military Cross and had certainly earned it”.